Keeping with this week’s Jimi Hendrix theme, it is worthy of noting that 45 years ago this week — on July 26, 1970 — Hendrix performed what would be his last concert in his hometown of Seattle.  It was two months before his death.

At a show marked by particularly heavy rain, Hendrix played a total of 12 songs, opening with the old Experience classic “Fire.”  Hendrix even performed his incendiary take on “The Star-Spangled Banner” — just about three weeks before its more famous airing at Woodstock.  Here’s a rough bootleg copy of the Sick’s Stadium cut, which then segued into “Purple Haze.”  Sweet that this even exists!

https://www.youtube.com/watch?v=JSQXwF_RoaQ
Hendrix also played songs he was working on for his unfinished follow-up album to the 1968 classic Electric Ladyland. “Hey Baby [New Rising Sun]” was one such song, which closed the 7/26 show.

The longtime home of the Seattle Rainiers baseball team, Sick’s was primarily used for sporting events though it was frequently employed for the occasional rock concert.  In fact, Hendrix once attended an Elvis Presley show there as a teenager. The venue was demolished in 1979 and a sign commemorating Sick’s was erected outside the Lowe’s Home Improvement store which now stands there. 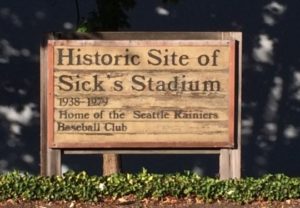 Hendrix would perform only three more times on American soil before he was found dead by friends in London.  He is buried at Greenwood Cemetery in Renton, WA.

Thanks to OTW student Eric Andrews’s research and reporting for this article on a great piece of Seattle history.  And to our pal Lucas, the Hendrix fan and featured in our OTW Student Spotlight only a few days ago … I’d say the timing is uncanny!

Off the Wall School of Music is now teaching Guitar Lessons! You can sign-up with Ryan Hoffman the guitar guru from Seattle’s […]

One of the biggest hit singles of this summer has been Meghan Trainor’s “All About That Bass”. A good summer jam is […]

10 Bass Guitarists You Should Check Out: 1. John Entwistle (The Who)—Nicknamed “The Ox”, Entwhistle was also often called “Thunderfingers” from the […]