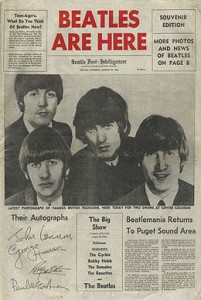 On August 25, 1966, The Beatles made their final appearance in Seattle, playing two shows at what is now called KeyArena.  It was in the middle of their third North America tour, which, as history soon showed, was their final tour, period.

In fact, the band’s final performance in Seattle turned out to be its penultimate concert.  Sure, they went on with successful solo careers, but at the time, few knew the band was on the verge of breaking up.  Not even all the band members were convinced.

Flying in from Los Angeles the morning of August 25th, the Beatles stayed at the legendary Edgewater Inn, where there is now a Fab Four-themed suite. The band also roomed at the hotel when they first played Seattle, in August 1964, after a number of other hotels refused to book the foursome.

Because rock concerts didn’t last as long as they do these days, bands often scheduled two shows in a single day, which is exactly what The Beatles did in Seattle.  Shockingly, the afternoon concert was sparsely attended — only 8,000 of the 15,000 seats in the Coliseum were filled (aforementioned “Snub #2). On the other hand, the 8 P.M. show was packed (Seattle redeemed.)

The Beatles performed a total of 11 songs at each show.  And, even though rock concerts tended to be brief affairs — hardly lasting longer than an hour — The Beatles’ shows were sometimes even shorter than the typical length, often wrapping up within 30-40 minutes.

After opening with a cover of Chuck Berry’s classic “Rock and Roll Music,” The Beatles then concentrated on their recent hit singles, such as “She’s A Woman” and “Paperback Writer.”

“Yesterday,” the 1965 single of which featured only Paul McCartney and a string quartet, had been rearranged as a band number. When performed as such, the results were often mixed, at best.  See for yourself from this 1966 version, played in Japan.

As you can see from the set lists, the Beatles dared to perform songs from Rubber Soul, their 1965 album, such as “If I Needed Someone” and “Nowhere Man.” This was a daring move because several songs on Rubber Soul were a challenge to make work in concert. This was either due to new studio “production tricks” or because some of the cuts required instruments beyond guitars, bass and drums. So, when the songs were adapted for the concert stage, a little of the magic was lost.

Similarly, songs from the Beatles’ newest album, Revolver, released in 1966, were nearly impossible to recreate in concert with the technology available at the time.

No one at either Seattle concert could have guessed that it would be the last time they would see The Beatles play in Seattle. However, only four days later, on August 29, the band performed their final concert at San Francisco’s Candlestick Park. (Hint: Click on that link, it’s a pretty good story, if you have a few minutes – and are a Beatles fan.)

The band did perform one last time, in 1969, in an unannounced rooftop concert in London that was featured in the 1970 documentary, Let it Be. 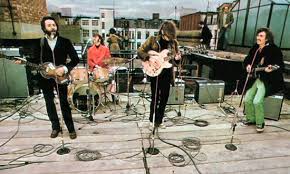 Got a Nirvana fan in your life?  How about someone who enjoys Seattle’s rich music history?  Let’s take a look at some […]

Happy Birthday to singer Cyndi Lauper, a lifelong champion of the LGBT community. Hear her “True Colors” song and read about her efforts to improve the lives of LGBT youth. <3

Thanks for sauntering along with us this week.  Or, at least just humoring us.  It’s been fun.  So here are some of […]