Got a Nirvana fan in your life?  How about someone who enjoys Seattle’s rich music history?  Let’s take a look at some of the best Nirvana books out there!  But before that, let’s hear what Kurt Cobain has to say about one of his favorite books, “Perfume,” in this August, 1993, interview.

BONUS!! After the interview, you’ll see how that book relates to this Nirvana Week-0-mania.  And then you’ll also gist of some of the more popular Nirvana/Cobain books.

We hear that they make great gifts!  The links will take you to the book pages at Seattle’s own Elliot Bay Books.  Fill up your cart and you might have all of your holiday shopping finished by today…

OK.  So the book he mentioned in this interview is called “Perfume: The Story of a Murderer.”  As Cobain said in the above interview, he read it many times and was strongly influenced by the book.

In fact, the song “Scentless Apprentice,” was inspired by “Perfume” and was on Nirvana’s third and final album “In Utero,” released in during this very week in 1993.  There you go!

Another popular book is the biography of Kurt Cobain, Heavier than Heaven,” which details Cobain’s life from his early days in Aberdeen, WA to rock-and-roll stardom.

Are you superstitious?  Do you know about the 27-Myth?  Beginning back in the 1930s, there is a theory that some of the greatest musicians mysteriously die at the age of 27.  The list is long and includes: Cobain, Jesse Belvin (“Earth
Angel,” “Goodnight My Love”), Rudy Lewis of the Drifters, Brian Jones of the Rolling Stones, Jimi Hendrix, Janis Joplin, Jim Morrison, Ron “Pigpen” McKernan of the Grateful Dead, Mia Zapata of the Gits… and so 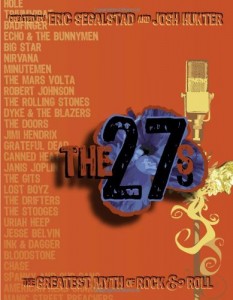 on.  If this is your thing, then you might want to check out the book “The 27s: The Greatest Myth of Rock & Roll.”

Cobain was known to write endlessly in spiral notebooks.  He would draw, experiment with lyrics, and write poetry, some of which would end up in songs — though he ad 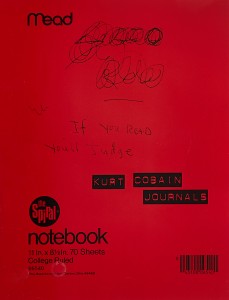 mits in the above interview, that he often didn’t give much thought to the song lyrics and it made him feel uncomfortable to be asked about them — especially the ones that didn’t mean
anything! But, here, in Cobain’s “Journals,” you can get a glimpse into what he was thinking.  It came out in 2003 and was called by Rolling Stone Magazine, “the year’s most fascinating, heart-breaking rock book.” 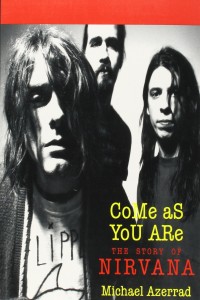 This final book was written about Nirvana, when they were on top of the world.  “Come As You Are” was released in 1993, six months before Cobain’s suicide, and includes interviews with all three band members, as well as friends and business associates.

The author added a final chapter after Cobain’s death.  The interviews for this book were collected and made into a film documentary,  “Kurt Cobain: About a Son.”

I hope you enjoyed this little trip down Nirvana Memory Lane!

Why this week?  Because something monumental happened in Seattle this week in 1990.  It had to do with a pink-cheeked Nirvana with […]