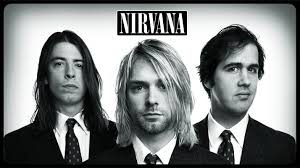 Thanks for sauntering along with us this week.  Or, at least just humoring us.  It’s been fun.  So here are some of the
videos that we promised.  There is lots of good stuff on Nirvana and no shortage of material, especially considering that they weren’t around very long.  Here are a few pf the videos that were mentioned in the Facebook post, detailing what they thought was Nirvana’s 10 most defining moments.

The first one is the “official” video for “In Bloom,” where the band members parody a 1950seque Ed Sullivan type show.  It is very kooky, especially when they get into costume.

These last two videos “exceeded the size limitation” of the website so here are the links!

This is the 1992 MTV Video Awards where the band was instructed to not play “Rape Me,” but the band decided to toy with the producers before breaking into “Lithium.”  Looking at the other band members, I’m not sure they were in on it.

And here is “Top of the Pops” where the band plays “Smells Like Teen Spirit” to the rhythm of Johnny Cash.

Fall is here!  Enjoy your weekend!

So, by now, we should all know now that Pearl Jam exploded and it all started 25 years ago this very week. […]

By Eric Andrews, OTW Student Today in Seattle Music History = Today in Beatles History How cool! On August 25, 1966, The […]