Recognize this?  It looks a lot like an early summer in Seattle… 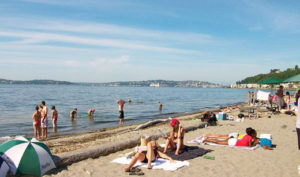 Indeed, the heat wave came early to Seattle this year — and then it went away! As we settle in for what will most certainly be another beautiful PacNW summer, let’s get in the mood with a virtual journey through some classic hot-weather hits. Nothing like summertime music, right?

In the very early days of recorded music, it was thought that when a song referred to a specific time of year, sales would drop once that season was over — so they’d try to keep things as generic as possible.  “In the Good Old Summertime,” recorded in 1902, broke the mold and we are glad it did.  The song was adapted by different musicians for decades – even more than a century later by this modern barbershop “quartet.”

Here are some of the summertime, seasonal hits that followed:

“Summertime”
Though Gershwin’s “Porgy and Bess” was not a theatrical success, its songs received attention right after the show’s opening in 1935.  “Summertime” has become one of the show’s most famous, as there have been an estimated 33,000 recordings covers over the years. Often sung or played at an easygoing pace, here you will hear Billy Stewart swing it furiously, unleashing some of the fastest, most animated scatting you have ever heard. A Top 10 single in 1966, it was one of Stewart’s biggest hits before his tragic death in 1970.

“Hot Fun In The Summertime”
The year after show-stealing performance at Woodstock, Sly and the Family Stone released this laidback 1969 single, which reached #2 on the pop charts.  It has become a classic summertime hit.


“Summer”
Another song that salutes the carefree, relaxing nature of the season , this number was recorded as for War’s 1976 Greatest Hits compilation.  It had climbed as high as #7 on the pop charts by September.  Like most of War’s songs, which often evolved gradually from jam sessions, the writing on “Summer” was credited to every member in the group.

Check with your teacher about learning these songs as well as other great summer songs.

This video shows how to add in some extra notes to the right hand and left hand bass line for rocket man!!!

We all know that musicians are creative people. We came across these two street musicians and just had to share! Check out […]

The chords and groove for hit the road jack on the piano!

We came across this awesome Youtube video made by Carly & The Roots & Jimmy Fallon and wanted to share! In this video […]