Being the child of a parent in show business has its share of problems. Those problems are magnified when the kid enters the business themselves and is then faced faced with the dilemma of establishing their own separate identity — while also taking care to acknowledge and honor the legacy you are part of.

An iconic father/son musical dynasty have birthdays in July, so we’ll take this time to explore their lives.   Woody Guthrie was born on July 14, 1912, and his son Arlo was born on July 10, 1047.  Both stand tall in what proved to be an ongoing musical legacy of performing and activism. 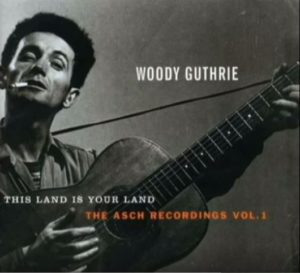 Showing a natural affinity for learning and playing music by ear at a young age, Woody was an avid reader, as well as a collector of traditional English songs and ballads. He first began honing his musical craft by playing at dances with his father’s half-brother, Jeff Guthrie.

When the Great Depression hit in the early 1930s, Woody left his first wife Mary and their three children at home in Texas while he looked for work, joining the mass migration of citizens from the Midwestern and Southern U.S. to California.  Many of the songs Woody wrote emerged from the people he met and the struggles they faced during this time.

Of the thousands of songs and poems Guthrie wrote, many of which he never recorded, his most famous is arguably his 1940 song “This Land Is Your Land.”  Written as a populist response to Irving Berlin’s “God Bless America,” Woody’s song has remained a staple of children’s music classes ever since. (Listen to Woody’s first recording of the song, made in 1944.)

By the late 1940s, Woody’s health began to deteriorate. His erratic behavior was often misdiagnosed as alcoholism or schizophrenia, but it was finally determined that he was suffering from Huntington’s Disease, the same hereditary condition which affected his mother and led to her being institutionalized.

Hospitalized for the last decade of his life, Guthrie was mostly unaware of the renewed interest in his music and how it fueled some of the activism in the late 1950s and early 1960s. Inspired by Woody’s example, a new generation of singers and songwriters began to make their own mark on the social scene. One such artist was a 19-year old from Minnesota named Bob Dylan. When Dylan moved to New York to start his career, the young artist visited Woody often.

Woody Guthrie died of complications from Huntington’s Disease on October 3, 1967, at the age of 55. As there had been little knowledge about the disorder, Guthrie’s illness had essentially gone untreated. His death proved to be the beginning of a greater awareness of the disease, and his second wife Marjorie, who cared for her husband to the end, helped found what became the Huntington’s Disease Society Of America.

The eldest of four children from Guthrie’s second marriage, Arlo Guthrie was already set to follow in his father’s footsteps at age 19. A demo recording of Arlo’s 18-minute “talking blues” epic “Alice’s Restaurant Massacree” is 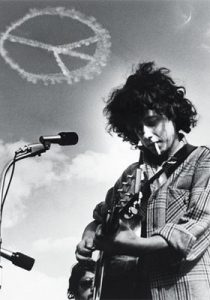 said to be the last thing his father heard before he died.  (If you got 18 minutes to spare, here is the original 1967 album version of that song, which Arlo has often updated over the years.)

The song was inspired by a true incident involving an arrest for littering that exempted him from being drafted to serve in the Vietnam War.  “Alices Restaurant” also became a counterculture classic and spawned a 1969 Oscar-nominated motion picture starring Arlo as himself.  He performed at Woodstock that same summer.

Along with his own songs, a sizable amount of Arlo’s career has been spent as an interpreter of the work of other songwriters. His recording of Steve Goodman’s “The City Of New Orleans”, from his 1972 album Hobo’s Lullaby, became a #18 hit on the Billboard Hot 100 in 1972.

In 1983, Arlo started his own record label,
Rising Son Records, and recorded and released music through it, including his most recent studio album, 2009’s “Tales Of ’69.”

The Guthrie saga continues to this day, with Arlo’s own four children getting in on the act: 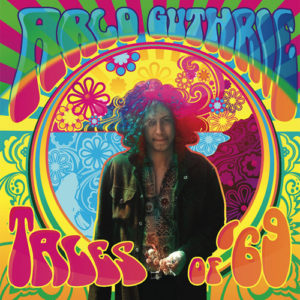 —Daughter Annie Guthrie, along with writing and performing, frequently works as the family’s tour manager. 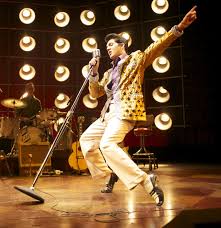 January 8th is a crucial day for the history of rock & roll. How much do you want to bet some of […]